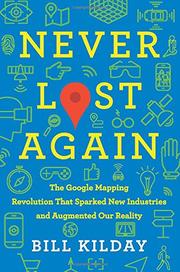 An insider’s account of the mapping technology that gave rise to Google Maps.

Google’s mapping service provides satellite imagery, street maps, panoramic street views, real-time traffic conditions, and route planning for about 1 billion users monthly. A popular app on iPhones and other devices, it has spurred industries from Yelp to Priceline to Uber. In this bright, highly personal debut, Kilday, a vice president at Niantic, which developed the augmented reality game Pokemon Go, describes his role in the mapping story, from the 1999 inception of a struggling tech startup named Keyhole, through the technology’s enormous exposure as part of CNN’s 24/7 coverage of the U.S.–led Iraq invasion, and the 2004 acquisition of Keyhole by Google, which turned the software into wildly popular Google Maps and Google Earth. Drawing on his experiences as marketing director at both Keyhole and Google Maps, the author crafts an engaging, blow-by-blow account of people and events that made mapping an unusually powerful tool for the military and intelligence communities, for commercial real estate interests, and eventually for anyone looking for a street address or just curious to see his or her house from the vantage of a satellite. A constant note taker, Kilday offers colorful details on life inside the Googleplex (turf wars, pool and dart games, and walk-ons by Google founders Larry Page and Sergey Brin, etc.), where the Keyhole team realized only gradually that “Google was launching a moonshot mapping effort to transform how we find our way in the world.” In recounting the effort, he describes the technology’s role in saving lives during Hurricane Katrina and in the advent of self-driving cars, and he offers accessible descriptions of satellite imagery and the operation of Google’s hundreds of Street View vehicles. Writing with warmth and humor, the author has great fun recalling life as a state-college alum working among intense Stanford graduates.