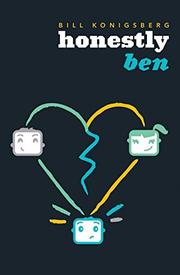 Not your average boarding school drama.

Seventeen-year-old, New Hampshire–farm–raised, proud Czech-American Ben Carver has just been elected the captain of posh, private Natick School’s famed baseball team in his junior year. He’s also been told by the headmaster that he’s next in line to win the school’s coveted scholarship—awarded to only one Natick student annually. (Like his teammates, Ben is white; unlike them, he’s not “exceedingly wealthy.”) He's a huge history buff; he's kind. He's also struggling between what he feels versus what he yearns to feel. Earlier in the year he experienced an intense, romantic connection with his best friend, Rafe, that still haunts him. However, when he meets an outspoken student from the nearby all-female academy, he thinks he can finally dampen the sparks Rafe ignites. Maybe. Konigsberg's latest is full of heart. Not only is Ben fully fleshed with an honest, admirable set of emotions and principles, he's also 6 feet 2 inches and muscled—exactly the kind of protagonist that readers will be drooling over. Every other character is rendered in the same thoughtful way—even the douchebags have hearts. The plot unfolds naturally from Ben's point of view, and despite a somewhat forced ending it still ends on a high. Packed with literary references, pranks, heady conversations, humor, honesty, and tribulation, this is one that will be remembered.

A fresh, insightful, inspiring take on what it means to come out.