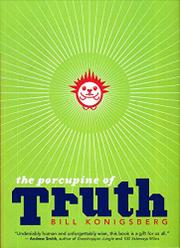 THE PORCUPINE OF TRUTH

A straight, white wisecracking atheist from New York City finds both his mind and heart opened when he spends a summer in Billings, Montana, with his estranged, dying father.

On his first day in Billings, Carson meets Aisha, a fellow wisecracker from one of the few black families in Billings. Aisha's religious Christian father has kicked her out of their home for being a lesbian. Carson impulsively offers her a place to stay, and his mother and father reluctantly agree. The four of them sharing a home—Carson, Aisha, Carson's mother, who communicates almost exclusively in therapy-speak, and Carson's father, sometimes bitter, sometimes vulnerable, usually drunk—could fill a book on its own. But when Carson and Aisha discover evidence that Carson's grandfather, who disappeared when Carson's father was a child, might be findable, the two embark on a far-reaching road trip. The pacing is occasionally uneven, and some of the devices that keep Carson and Aisha on their journey are a bit too convenient, but the story tackles questions about religion, family, and intimacy with depth and grace. The mystery of Carson's grandfather is resolved with bittersweet thoroughness, and Aisha's storyline comes to a hopeful, if also painful, resolution of its own.