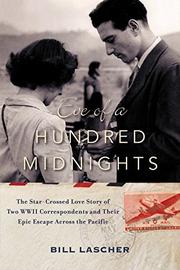 EVE OF A HUNDRED MIDNIGHTS

In 1936, when Stanford undergraduate Melville Jacoby first visited China on a student exchange program, he immediately felt drawn to the region and to travel. “The itch is perpetual,” he confessed. Jacoby returned to Stanford to focus his studies on Asian affairs and journalism, and by 1939, he had gathered enough writing assignments for a return to Asia. Briefly back in the United States, he met and fell in love with Annalee Whitmore, a writer who shared his fascination with the Far East. In 1941, she followed him there, and the two married. When journalist Lascher discovered that Mel Jacoby was his cousin, he was inspired to find out as much as he could about the man political journalist Theodore White called “one of the greatest U.S. war correspondents.” The result is a gripping, impressively researched debut, both a biography of Jacoby and a history of Asia in the throes of war. Mel and Annalee soon settled in Manila, where Mel became Time magazine’s Far East bureau chief; his reporting gave America its only “window onto the buildup for war in the Pacific.” Lascher ably conveys the frustration of Army officers with the “Europe First” strategy, which left them without necessary supplies and soldiers. He chronicles Japan’s increasing belligerence, the Nanking massacre, unceasing bombing, and internment of reporters. Fearing for their lives, Mel and Annalee left Manila, burning piles of notes before they fled to Corregidor. From there, they closely followed the war, including the “subdivision of hell” on the Bataan Peninsula. Soon, though, they needed to escape once more, this time making a slow, dangerous journey to Australia, traveling by boat only at night. From Melbourne, they learned of the Bataan Death March, which killed between 7,000 and 10,000 Americans and Filipinos.

From interviews and archival documents, Lascher creates a seamless narrative of daring and dedication.