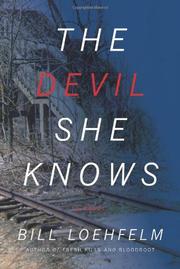 THE DEVIL SHE KNOWS

Blue-collar Staten Island is the setting for Loehfelm’s third novel, as it was for its predecessor, Bloodroot (2009). Maureen Coughlin is a workhorse. She’s been waiting tables in bar/restaurants ever since she left home at 18. Now 29, she’s working nights at a joint called the Narrows; no boyfriend, no shoulder to cry on. “Hers was not a world where a girl could let her guard down.” Then one night her life changes, following a fundraiser for Frank Sebastian, a candidate for State Senate. He’s an ex-cop who owns a bunch of security outfits; his employees are like a private army. After hours, Maureen surprises her manager Dennis getting intimate with Sebastian in the dimly lit bar. It’s no big deal for the worldly Maureen. She makes it clear she won’t snitch, but that’s not enough for the hard-charging Sebastian. Guys with guns have the landlord’s son open up her apartment; her TV is destroyed. Dennis is found dead on the railroad tracks; an autopsy shows he had been strangled. Maureen takes refuge with her mother, an unsympathetic scold, but Sebastian tracks her down. Still, Maureen gains the support of homicide detective Waters, who had worked with Sebastian years before and knows he’s a monster of depravity. All he asks of Maureen is that she lie low. She ignores his advice. Armed with a switchblade, she confronts Sebastian at the gym. Her behavior is as dumb as that of Sebastian, whose mobster antics clearly imperil his election campaign, though the truth is we never believed in that anyway. The background, the hard grind of keeping customers happy, is authentic; most everything else feels fake. Loehfelm struggles to maintain suspense, then overcompensates for a sluggish pace with a high body count and an absurdly melodramatic ending.