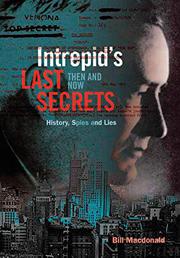 Then and Now: History, Spies and Lies

A revisionist history of the infamous Canadian spy William Stephenson that focuses on the fascist enemies that he encountered in Allied territories.

The historical legacy of spymaster Stephenson has long been a confusing one. Some historians consider him a minor player in the clandestine machinations of World War II; others believe his contributions were inestimable in value; and still others don’t comment on him at all. As former teacher and journalist Macdonald (The True Intrepid, 2011) observes, it surely didn’t help that Stephenson lied to authors and reporters about the details of his own life. With astonishing meticulousness, the author sets out to fill in these lacunae, starting with Stephenson’s early years in Manitoba, Canada, where he became a successful entrepreneur. He established his own industrial espionage group in the mid-1930s for business purposes, and by 1939, he was in contact with Britain’s Secret Intelligence Service. Stephenson was eventually sent to New York City as a so-called passport control officer, where he ran his own organization, the British Security Coordination, whose aims were to undermine the Axis powers as well as homegrown fascist groups working to undermine the Allies in the United States and England. Macdonald follows American historian Carroll Quigley’s research closely as he shines a light on these groups, which included such institutions as the Council on Foreign Relations, which he contends was working against President Franklin D. Roosevelt. Macdonald’s study is not only rigorously researched, but also conveyed in cinematic terms—and as a result, even unconvinced readers will find themselves riveted. Over the course of the book, the author draws on so much tangled evidence, including hearsay and rumor, that the work has the air of a conspiracy theory at times. However, his argument is relentlessly thorough, and his principal contentions seem plausible. Finally, Macdonald makes a ringing case for exploring a nation’s past: “A country with unexamined history is a country without a soul.”<

A remarkably incisive account of an endlessly compelling figure.