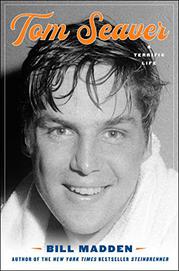 A vivid portrait of one of modern baseball’s legendary players.

Tom Seaver (1944-2020) was small as a boy but made up for it with both athleticism and steely determination, drawing attention early. As veteran sportswriter Madden relates, a great training tool was that Seaver and a boyhood friend were each forbidden to leave their yards, so they had to throw straight to each other lest the game end. As a result, Seaver was already working on strikeouts at the age of 6. Modest and intellectually inclined—he and his teammates played bridge in the locker room to sharpen their minds—Seaver once said, “the thing I most appreciate about the game is that it is one of the few places left where a person like myself can show his individuality.” He certainly did that, and though team managers didn’t always treat him well or use him to best advantage, he raised the average for every one of his teams. Madden’s account centers on Seaver’s chase to accumulate 300 wins, which put him in the highest stratosphere of pitchers. On the infrequent occasions when he had a bad game or, more rarely, a bad season, he was fully willing to shoulder blame. As he said of a performance-related pay cut by his beloved New York Mets in 1974, “they paid me a good amount of money last year, and I didn’t pitch up that amount.” The year may not have been much, but look at 1971 and 1975, Madden suggests, and all can be forgiven. Seaver’s decline to Lyme disease–related dementia resulted in an embarrassing episode or two and, eventually, a tragic inability to recognize his fellow Hall of Famers, but the 12-time All-Star and three-time Cy Young Award winner made a brave effort. The author’s cutting conclusion is perfect: Tom Brady tried to patent the phrase but was roundly rejected, for “there was, and always will be, only one Tom Terrific.”

A fitting tribute to a great, memorable pitcher.