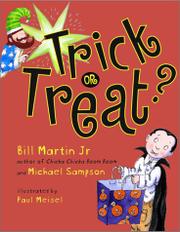 Readers will revel in the alliterative names and twisted phrases but the enjoyment will be superficial unless they can figure out that the “ceanut pups” are the “peanut cups,” and other such treats are turned “wackbards” by Merlin’s spell. Martin and Sampson, who have recently collaborated on several titles (I Pledge Allegiance, above, etc.), tell of a young boy going trick-or-treating in his apartment building. On each floor, a costumed resident gives him a treat, until he reaches the apartment of Magic Merlin, who gives him a trick instead of a treat. Back down the boy goes, this time collecting a wacky trick instead. “Belly Jeans” replace the “Jelly Beans.” “Stocolate Chicks” come in place of “Chocolate Sticks,” and so on until the boy returns to his own apartment with a bag full of puppies, cars, and chickens and then his father’s hug breaks the spell. The realistic watercolors depict neighbors in silly Halloween costumes and images of spiders and pumpkins on sweaters and ties. The story itself, though, is a somewhat confusing gimmick that may defy comprehension by primary-aged readers and will not interest most of the older readers, who will see through its contrived story line and all-too-convenient conclusion. (Picture book. 5-7)