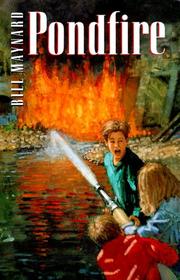 Maynard (Quiet, Wyatt!, 1999) makes fire the pivotal plot element in this short, episodic action novel. In the small village of McIntosh, Jed, the fire chief’s son, is branded a fire bug for a past transgression in which he accidentally burned down the family garage. Now, when a local swamp catches fire, he is the first to be blamed. Norm Dempsey, wannabe fire chief, is first to point the finger. Through a freak accident, Jed’s father lands in a coma in the hospital. A series of fires, a swamp fire, brush fire, barn fire, and school fire in the sports equipment room, forms a string of actions that make up the story. Toss in a few boyish pranks and some not-so-subtle clues and the story builds to its natural climax—an even bigger fire. This time, a monster train wreck sets the whole pond ablaze. Not surprisingly, Jed takes charge and steps in to rescue the day, the nursing home and surrounding houses, with a little help from his recuperating father, all in the name of saving face and proving that Norm Dempsey is behind the arsons. This fast-moving, predictable fare has some great action sequences, with appeal for mystery fans. (Fiction. 9-12)