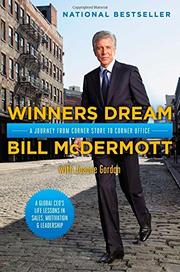 A Journey from Corner Store to Corner Office

by Bill McDermott with Joanne Gordon

A memoir about the life and leadership methods McDermott, the recently appointed CEO of software giant SAP, employed to shape the trajectory of his career.

The author attributes his rise—from salesman to corporate management and executive leadership at the Xerox Corporation, on to higher executive positions at tech companies Siebel and SAP—to his family and his experience as a teenage entrepreneurial delicatessen owner on Long Island. When he added pinball machines at his deli, which helped increase sales and pay off the financing for his purchase within a year, he learned a lesson he never forgot: the importance of stretching to achieve seemingly impossible goals. The author learned the importance of teamwork from his basketball coach father, and selling his mother's sandwiches taught him about providing customers what they wanted (“he would later call this “customer-centricity”). His successful business model involved combining the work of sales forces, product developers and administrators to improve sales results by developing conceptual packages that empowered clients to increase their own productivity. When McDermott demanded that salespeople become “innovators,” he combined almost unreachable stretch goals with equally grandiose reward programs—e.g., family vacations in Hawaii—and teamwork-enhancing education and discussion processes. He became the go-to businessman for a company requiring a major revenue boost to reverse declining sales. As he took on other projects, he set specific goals at well-staged conferences, and he organized follow-up through continuing education. In just one year, he led the Puerto Rican sales district from the bottom to the top of Xerox's hierarchy. At SAP, sales were doubled in a year, helping to turn around the deleterious effects of the 2008 economic slump. Much later, McDermott graduated from business school and the Wharton executive development program.

An inspiring but somewhat familiar tale of success driven by salesmanship.