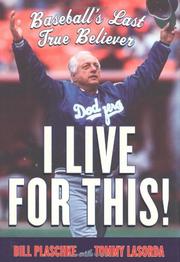 I LIVE FOR THIS!

by Bill Plaschke with Tommy Lasorda

With the help of Lasorda, Plaschke chronicles the beloved Dodger’s life and career, from his humble beginnings as a poor child in Norristown, Penn., to his career as a left-handed pitcher, to the position which solidified his legacy—Hall of Fame manager of the Dodgers. Plaschke portrays Lasorda as a rotund, likable, noncerebral leader who loved his job, the Dodgers and food. The author goes to great lengths to explain that Lasorda was an incredibly inspirational speaker and witty storyteller. But Plaschke hamstrings this characterization with descriptions of the manager’s run-of-the-mill speeches—such as Lasorda “inspiring” a pitcher to throw strikes by telling him, in no uncertain terms, that he needed to throw strikes—and corny jokes. Although Lasorda managed some of the Dodgers’s greatest heroes—Fernando Valenzuela and Orel Hershiser, among many others—here he passes up a worthwhile opportunity by spending little time describing their great careers with the Dodgers, aside from taking what he thinks is due credit for their successes. Mike Piazza—one of the most beloved Dodgers of the past 20 years—merits little more than a mention, as Lasorda merely points out that he was the man responsible for identifying the talent that so many other scouts and managers ignored. Ultimately, the book suffers from Plaschke’s attempt to simultaneously portray Lasorda as both a player’s manager who would never say an unkind word about a member of the team, and a tough-as-nails field general who would never back down from anyone and who would, if necessary, use his fists to make his points. Still, there’s no denying that Lasorda decorated his trophy case with plenty of hardware, including two World Series titles and, after departing the Dodgers as manager and against long odds, a gold medal in baseball at the 2000 Olympics.

For die-hard Lasorda or Dodgers fans only.