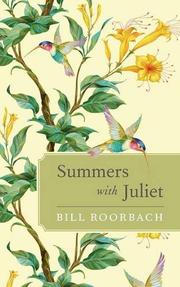 Courtship, travelogue, nature observations, and fish stories cover the map in this unfocused debut. Roorbach (English/Univ. of Maine at Farmington) pegs his narrative on bis courtship of his wife, Juliet. He was 29 and she 20 when they met in the Hot Tin Roof disco in Martha's Vineyard. During a tumultuous eight-year relationship, they often broke up, but had their best moments together traveling--or so says the author, who conducts us from Belgium to Paris and Norway, across Canada, Martha's Vineyard, the Midwest, New Mexico, Colorado, Mt. St. Helens, and Jamaica. Along the way, several chapters on fishing (scant mention of Juliet here) are tossed in, followed by assorted nature essays. Juliet's wooing makes for some of Roorbach's more engaging writing, but also for some of his most unfortunate--""My Venus in Blue Jeans wore a paper Burger King crown and sang nonstop as we rolled past the cornfields."" This sort of superficial treatment undercuts belief in the passion of the author's pursuit; when he discovers, for example, that Juliet has been cheating on him with regularity, he glosses over with the observation that ""my black eyes fairly dripped with tears."" As a couple, Roorbach and Juliet strike many cute poses (""She stood naked and shivering, hugging herself, while I screwed the drilled Folger's cap onto our vessel, then sighed as I dumped hot river water over her in a perfect shower....We were clean. We were warm"") but possess all the depth of celluloid. In his chapters on nature, which could well be the nucleus of another book, Roorbach's observations of turkeys, hummingbirds, sunfish, and so forth are careful and intelligent, but uninformed by natural history or ecology. Nicely penned in places, but hamstrung by incessant meandering.