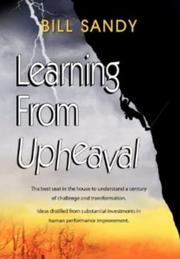 Sandy (Forging the Productivity Partnership, 1990), a retired CEO who had a front seat view of the automotive industry post–World War II, provides a thorough accounting of his role helping to shape the business of human performance improvement.

The roots of a long career counseling companies on adapting to change began with Sandy’s economically turbulent childhood. When Sandy was 4, in 1933, his father died and because his father’s wealth was wiped out in the Great Depression, the family moved from the upper echelons of society to the struggling middle class. After logging some journalistic and advertising experience (some while still in college), Sandy’s career began in earnest in 1953 at the Jam Handy Organization, an innovator in distance learning. Thrilled with the creative culture and eager to spread his wings, he opened Sandy Corporation in 1976 with the blessing of his mentor. Sandy was particularly adept at seeing a given economic reality in front of him and finding ways for both his own company and his clients to adapt. Sandy Corporation advised corporations like Chevrolet, then GM as a whole and later, companies outside the auto industry. Yet Sandy doesn’t give readers a broad understanding of how the company operates. Crammed with names, titles and particular client undertakings, Sandy’s text hews close to the specifics. When the author does step back to reflect on and outline his hard-won wisdom, it’s a welcome change. His insights are astute: “If people don’t do what you want them to do…it’s generally one of three things. They don’t know what you want…They don’t know how to do it…Or they don’t think it’s worth a big effort.” One wishes Sandy would have let the lessons rather than the facts of his career take center stage. Though chock-full of useful nuggets, the meticulous, chronological retelling of a long career can be tedious.