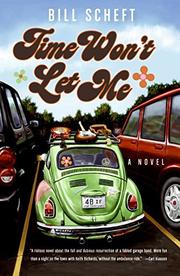 This rock-’n’-roll novel about the reunion of a New England garage band has a promising premise, but an off-key execution.

Scheft (The Ringer, 2002) has written for David Letterman and for Sports Illustrated (where he contributed a humor column until recently). In his second novel, which borrows its title from the hit by the Outsiders, he mines what is plainly a deep knowledge of and passion for the rock of the ’60s, when amateur bands were inspired by the British Invasion to make some musical excitement of their own. Within this era of “one-hit wonders,” Scheft’s novel concerns a no-hit band named the Truants, who formed in prep school and disbanded when they graduated, but not before investing a few grand in a vanity recording project resulting in a little-heard album. More than three decades later, well after most of the Truants have lost contact with each other, that album has somehow become a prized obscurity, reportedly worth $10,000 to at least one collector. As the Truants regroup to capitalize on their higher profile, the novel loses its rhythm to a bewildering array of subplots, some of which are absurd, few of which are as funny as Scheft likely intended. One of the former musicians is a gambler in way over his head; another is a barely closeted homosexual still working on his doctoral thesis; a third is an oversexed lawyer representing a fourth bandmate in a divorce. A sister of one of the bandmates provides some obligatory romantic complication. Though the novelist plainly has some affection for his characters, the reader doesn’t get the chance to develop the same, as the plot jumps from one episode to the next, while enveloping some real Boston musicians, including Peter Wolf from the J. Geils Band and Barry Tashian of The Remains.

The musical references may strike a responsive chord, but the story of lost youth, midlife crises and rock-’n’-roll redemption can’t keep the beat.