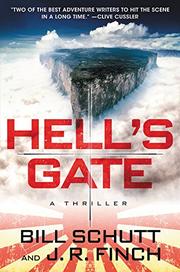 A World War II thriller with plenty of action and suspense in a most unusual setting.

In 1944, Capt. R.J. "Mac" MacCready, a tropical zoologist with a Cornell Ph.D., is sent deep into Brazil’s Amazon region to find out what a huge Japanese submarine is doing there. The I-400 is believed to have a hangar big enough to hold three floatplane bombers, and it has run aground in the mud. So Mac’s boss tells him to “find out what those Axis bastards are up to.” They’re up to a lot, as it happens. Mac guesses the sub was headed to Portão do Inferno, or Hell’s Gate (a real place). “What could possibly go wrong?” he asks himself sarcastically. Again, a lot. Think launch rails for missiles that might turn the tide on Germany’s Russian front and destroy entire American cities. Think evil Nazis and sentient vampire bats that take over parts of humans’ brains. Think giant man-eating turtles, vampire caves that have guano galore and are crawling with—well, never mind. Just think Indiana Jones. For that matter, this yarn evokes more than a few reminders of Stephen King, Joseph Conrad, and Bram Stoker’s Dracula. Readers will roll their eyes at the implausibility of certain details, but in a “Reality Check” after the epilogue, the authors convincingly explain themselves. For example, it won’t spoil the story to know that they revived a few species from extinction just for the telling of the tale, and they say there is historical basis for the Nazi project depicted. If this book is ever made into a movie, and it should be, it will have plenty of spectacular visuals and gross-out scenes. 3-D would be nice.

Fast-moving fun for thriller readers who enjoy a bit of horror and seeing bad guys get what’s coming to them.