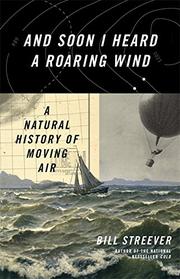 AND SOON I HEARD A ROARING WIND

A Natural History of Moving Air

Science, history, and personal adventure come together in a wild and witty exploration of wind.

When Streever, a biologist and nature writer, deals with a natural phenomenon, he does so with aplomb, plunging into the Arctic Ocean in Cold (2009) and walking on coals in Heat (2013). Here, he focuses on wind and sailing. A few years ago, the author purchased the cruising sailboat Rosinante; admittedly “a rank amateur” who is “scared to death of storms,” he set out from Texas to sail to Guatemala with his wife as his sole crew member. Streever calls it a “voyage to understand the wind,” and what happened to Rosinante and its sometimes-hapless, sometimes remarkably lucky crew of two was definitely a learning experience. Interspersed in his tale of their adventure-filled journey are essays on the history of weather predicting; profiles of meteorologists; descriptions of old and new meteorological instruments, from the barometer to weather balloons to satellites; a history of the harnessing of wind energy; and vivid accounts of the impact of moving air—e.g., the mighty hurricane that struck Galveston in 1900, the havoc of the Dust Bowl of the 1930s, the selection of the landing point for D-Day in 1944, and more. Readers will meet well-known and little-known scientists as the author ranges from the computations of early weather forecaster Lewis Fry Richardson to the chaos theories of mathematician Edward Lorenz (who coined the term “butterfly effect”). They will also acquire plenty of new vocabulary, as the author explains ventifacts, yardangs, einkanters, and dreikanters, all formations shaped by windblown sand.

Streever has a knack for blending his research and personal experience into an easy-to-read account that is hard to put down. Recommended for general readers curious about the natural world as well as budding scientists.