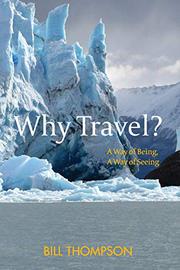 A Way Of Being, A Way Of Seeing

A nonfiction book on how, where, and why to visit places around the world.

Thompson, the author of Art and Craft: Thirty Years on the Literary Beat (2015),has written a somewhat unique travel book based on his previously published travel articles in Charleston, South Carolina’s Post and Courier. Each chapter includes an introductory essay on an aspect of travel followed by examples of places to go that relate to that topic. Along the way, the author offers challenges to conventional travel wisdom. For example, although the book is international in scope, it includes plenty of encouragement for Americans to travel in the United States. Indeed, an early chapter is about how Americans should see North America first, before venturing outside the continent—although it also emphasizes that this includes Canada, as well as the U.S., and provides an account of what to see in Quebec City. (He also includes Mexico in this section, as well.) Not everything has to be “off the beaten path”to be meaningful, writes Thompson, as plenty of intriguing things can be found in the familiar. That said, he also does justice to the well-known and lesser-known wonders of Europe and beyond, tackling the new vibrancy of modern Spain and Athens, Greece, beyond the Parthenon. There are also chapters that focus on the joys of train and automobile travel while also acknowledging the challenges of both—such as the fact that a car’s driver may find it difficult to enjoy road-trip scenery. And in a book that admittedly focuses on travel for solo adventurers and couples, he promotes the idea that family travel can also be adventurous and meaningful. There are a few flaws, though; for one, the author is somewhat inconsistent in providing travel tips in each chapter—some offer specific information on lodgings, for example, while others don’t. Also, there’s only a passing reference to the tragic history of Jewish people in the Prague area, which may strike some readers as insensitive.

An offbeat work that will likely provide inspiration to travel again in the future.