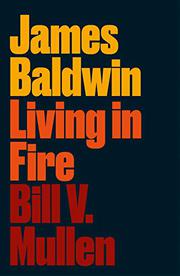 A concise biography of the celebrated black author’s radical voice.

Mullen (American Studies/Purdue Univ.; W.E.B. Du Bois: Revolutionary Across the Color Line, 2016, etc.) believes the time is right for a new biography of Baldwin (1924-1987), one that focuses on his political life and development. He argues that Baldwin’s role in campaigns for social justice has been “underappreciated,” and his emergence as an “icon of the global Black Lives Matter movement” requires a new assessment of him as a popular-culture touchstone. Also, as a queer black man, he is now seen as a forerunner in today’s debates on gender and race issues. Mullen’s approach is chronological: He moves from Baldwin’s youth as the oldest of nine children in a poor Harlem family to his radical student years and development as a writer to his years abroad (Paris, Istanbul) and his return to America to become a tireless, politically astute spokesman for civil and sexual rights, including AIDS. As poet Amiri Baraka noted at his funeral, Baldwin served as “God’s revolutionary black mouth.” Paralleling Baldwin’s personal story, Mullen deftly recounts the historical backdrop—the Vietnam War and protests, the Young People’s Socialist League, the Communist Party in America, the Palestinian liberation movement, the Nation of Islam, Black Power, Malcolm X, and the FBI’s relentless and crushing surveillance of Baldwin and black radicals—to more clearly assess Baldwin’s substantial role in the political and literary worlds from the 1940s to the 1980s. Throughout, Mullen discusses Baldwin as an influential novelist, playwright, essayist, and critic, quoting generously from his works. Giovanni’s Room was an “avatar of contemporary gay literature.” In The Fire Next Time, “Baldwin’s combined role as mentor, historian, and advocate for struggle on the streets found its literary complement.” A “somber, simmering, angry novel,” If Beale Street Could Talk is his “most damning single fictional indictment of the criminal justice system.”