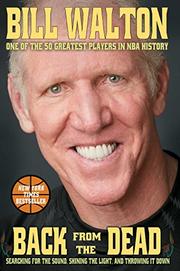 BACK FROM THE DEAD

A basketball legend reflects on his life in the game and a life lived in the “nightmare of endlessly repetitive and constant pain, agony, and guilt.”

Walton (Nothing but Net, 1994, etc.) begins this memoir on the floor—literally: “I have been living on the floor for most of the last two and a half years, unable to move.” In 2008, he suffered a catastrophic spinal collapse. “My spine will no longer hold me,” he writes. Thirty-seven orthopedic injuries, stemming from the fact that he had malformed feet, led to an endless string of stress fractures. As he notes, Walton is “the most injured athlete in the history of sports.” Over the years, he had ground his lower extremities “down to dust.” Walton’s memoir is two interwoven stories. The first is about his lifelong love of basketball, the second, his lifelong battle with injuries and pain. He had his first operation when he was 14, for a knee hurt in a basketball game. As he chronicles his distinguished career in the game, from high school to college to the NBA, he punctuates that story with a parallel one that chronicles at each juncture the injuries he suffered and overcame until he could no longer play, eventually turning to a successful broadcasting career (which helped his stuttering problem). Thanks to successful experimental spinal fusion surgery, he’s now pain-free. And then there’s the music he loves, especially the Grateful Dead’s; it accompanies both stories like a soundtrack playing off in the distance. Walton tends to get long-winded at times, but that won’t be news to anyone who watches his broadcasts, and those who have been afflicted with lifelong injuries will find the book uplifting and inspirational. Basketball fans will relish Walton’s acumen and insights into the game as well as his stories about players, coaches (especially John Wooden), and games, all told in Walton’s fervent, witty style.

One of the NBA’s 50 greatest players scores another basket—a deeply personal one.