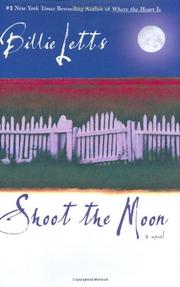 A Beverly Hills veterinarian goes south hoping to locate the mother who gave him up for adoption—but finds himself instead investigating a murder, a cover-up, and attempts on his own life.

Evoking the closeness of small-town life in DeClare, Oklahoma (epitomized by Teeve’s Place, a combined diner and pool hall owned and run by Teeve Narjo), bestselling Letts (Where the Heart Is, 1995, etc.) begins her third outing as handsome Dr. Mark Allbright arrives in town. Mark has just learned that he is adopted and that his mother was Gaylene Narjo, from DeClare, and he now wants to confront her and ask why she didn’t want him. But Gaylene, he learns, when he introduces himself to Teeve, was murdered 30 years ago and her son Nicky Jack, then ten-months-old, disappeared and was never seen again. The murder was attributed to a well-regarded African-American, Joe Dawson, who allegedly killed himself in jail. DeClare is a politically correct mix of good guys (Native Americans, a gay lawyer, a crusading anti-Republican journalist) and bad guys (a sadistic white sheriff, O Boy Daniels, a gun-nut, bigoted teachers) that may look good but makes for a blindingly unshaded story. As Mark reads Gaylene’s diary, he learns how she dreamed of becoming an artist and how, as a native Cherokee, she was angered by the bigotry she experienced at high school. He also learns that she was pregnant when she graduated, and no one knows who was responsible. With the help of Ivey, Teeve’s single and pregnant daughter, and of lawyer Hal Duchamp, Mark begins his search for Gaylene’s killer. Some of the locals, though, including O Boy Daniels and the radio station’s Arthur McFadden, aren’t happy about Mark’s continuing presence. Still, even when someone tries to take him out, Mark is not deterred. Eventually, of course, his amateur sleuthing pays off—and he even finds someone to love.

Perfect for the beach.