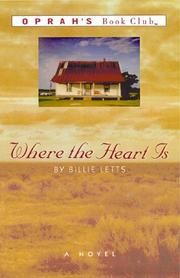 WHERE THE HEART IS

A debut novel whose rose-colored glasses yield a happy-go- lucky portrait of the down-home lives of uneducated poor folks in Sequoyah, Oklahoma. Letts's determinedly optimistic novel portrays a world where all races coexist harmoniously, and where the splintery realities of American rural life—poverty, teen pregnancy, single motherhood, homelessness, child sexual abuse—are palatably presented beneath a thick coat of Brothers Grimm varnish. It all begins when Novalee Nation, 17, pregnant, and heading west in an old Plymouth, is abandoned en route by good-for-nothing boyfriend Willy Jack Pickens in a Wal-Mart parking lot. Not disturbed by this momentary setback, Novalee quickly befriends the local color: Sister Husband, an AA- convert who hands out Xeroxed chapters of the Bible; Moses Whitecotton, descendant of slaves and an infant-portrait photographer; Benny Goodluck, a Native American nursery owner who gives Novalee a buckeye tree; and Forney Hull, the town librarian. Penniless, Novalee lives in Wal-Mart until the birth of her daughter (Americus) on the store's floor makes her a temporary celebrity. The story continues to track Novalee and her quest for roots, history, and home, depending primarily on the quirky tics of its characters for forward motion and throwing in the occasional tragedy to jump-start the plot (Americus' kidnapping, a tornado, a few untimely deaths). By the close, loose ends are neatly sewn up, unrequited loves requited, and the underlying theme—home is where the heart is—pounded home. A simple, lighthearted depiction of a rural America that's not: entertaining, good for a tear or two, but lacking in substance. (Film rights to 20th Century Fox)