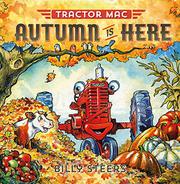 From the Tractor Mac series

Anthropomorphic Tractor Mac and his animal friends at Stony Meadow Farm are observing the seasonal shift from summer to autumn when they realize that one of their number is struggling with the transition: Fergus the calf has never experienced autumn, and he “does not like change.” The animals and Tractor Mac demonstrate familiarity with the why and not just the what of farm operations—as participants in the cyclical patterns dictated by the changing seasons, they gladly articulate to Fergus how the changes benefit the farm. The endpapers feature clearly labeled diagrams of Tractor Mac as well as his new mounted corn picker, which will delight readers interested in vehicles and machinery. Steers’ realistic watercolor-and-ink illustrations establish Stony Meadow and its expressive animal occupants in the foreground in warm shades of yellow, orange, and red while the white farmer couple appears most frequently in the background. When other humans are pictured, as at the Pumpkin Picking Festival, they are overwhelmingly white with just a few exceptions. The book’s lack of ethnic diversity, coupled with historically ambiguous depictions of vehicles and attire, suggests the story is set in the American rural northeast sometime around the middle of the 20th century.

Offers young readers a cheerful introduction to autumn and models observation, optimism, and resilience in the face of unexpected change.