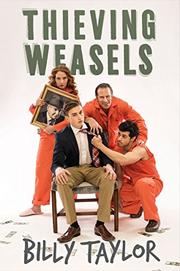 Cam Smith has only one wish: to escape his criminal family. He has managed to get himself into the prestigious Wheaton Preparatory Academy and plans to go to Princeton when his family shows up to ruin everything.

Cam’s life at his school is going splendidly, with a wonderful, rich girlfriend, Claire, who doesn’t know about his thieving family or that his real name is Skip O’Rourke. It’s all upended when Uncle Wonderful, now the head of the family, essentially kidnaps him and forces him to come home, telling him that his mother tried to commit suicide and now is in the hospital. It turns out that his mom and the family want to involve Cam in a complicated scam that has him killing an old mobster who had murdered their mark’s family. Cam is too smart to trust any of his family, including his mother, but decides to follow through—or at least to appear to do so. All the while he wonders who the family’s real victim might be: the mark, the mobster, or himself. Can Cam find a way to win after all? Writing in Cam’s oh-so-suspicious voice, Taylor milks the plot for comedy, delivering plenty of dark humor. His white, gangster characters come across as more than a bit stereotypical, but it all helps to set up the laughs.