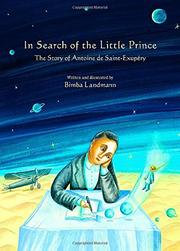 IN SEARCH OF THE LITTLE PRINCE

The Story of Antoine de Saint-Exupéry

Antoine de Saint-Exupéry might have loved young readers had he grown old and continued writing—certainly there’s much for children to love about the daring French aviator.

Landmann’s illustrated account, originally published in Italian and translated by the American publisher, is based on Saint-Exupéry’s writings. Photographs of Saint-Exupéry with siblings, aunt, comrades and wife, Consuelo, appear on the front endpapers. Landmann includes a fair amount of detail about Saint-Exupéry’s childhood, but his work as a pioneer of civil aviation forms the backbone of the story, with his life as a poet and a writer as the heart. The full-bleed illustrations are informed by magical realism if not surrealism, conveying a rich interior life of dreams and imagination alongside the external world. Her Tonio (as he was called) is solemn, his large eyes focused on something beyond the present. A grid of small windows against a desert landscape narrates moments from his career. If the drawings of airplanes are more impressionistic than precise, they nevertheless suggest the enchantment of being aloft in a small plane. A scene of Saint-Exupéry working on the manuscript for Le Petit Prince includes a peek at his imagined characters; the delightful back cover depicts the Little Prince and Tonio, shoes off, sitting in opposite chairs, apparently deep in speculative conversation. Sources cited are in Italian and include Saint-Exupéry’s writings and Consuelo’s memoir.

A gift to young readers with adventurous, poetic souls.