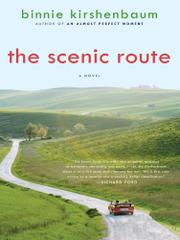 When Sylvia (a 40-ish, divorced Manhattanite) looses her job, she decides to visit Italy on a lark. In Florence she meets Henry at a café, and the two fall into something—maybe love, maybe not—but either way, they hop into his car and go. Henry’s heiress wife is off in India with her guru, leaving Henry alone, as he often is. With a taste for expensive drink, good food and fancy hotels, he knows how to show a girl a good time. The two have a map of Europe, time and lots of his wife’s money to spend, and so as they drive from one cobblestone village to the next, Sylvia tells Henry stories. Many about her peculiar relatives (mental illness is a distinguishing family feature); about her mother’s death and her father’s new girlfriend; about Raisinets and the many romances of Alma Schindler; about the broken heart of Aunt Semille; about pet cemeteries and war cemeteries and her not entirely terrible childhood; and finally, repeatedly, about her best friend Ruby, who pops in and out of their ongoing conversation about love and life. The novel’s first line foretells the end of the romance, so the narrative is a meandering, slightly sorrowful account of two people in love, but not quite brave enough to come up with a plan for a shared future.