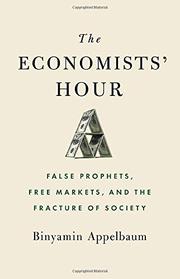 False Prophets, Free Markets, and the Fracture of Society

The hour of which the author writes is going on five decades now. The influence of economists on government has grown exponentially since the Nixon administration, with economists convincing the president to scrap the military draft and the judiciary to shelve antitrust cases, their numbers in the federal employ tripling from the 1950s to the 1970s. Economists have taken larger roles in formulating every aspect of public policy—and, in time, leaving their disciplinary bounds to issue pronouncements on matters societal and moral. Economists tend to be conservative, and truly conservative economists would in time, for example, come to blame inflation for the decline of the Protestant work ethic and a rise in corruption, fraud, and “a generalized erosion in public and private manners.” At the same time, government was generally taking Milton Friedman’s laissez-faire, free-market approach to problems rather than the Keynesian quantitative easement of old. As Appelbaum notes, one reason China has been successful compared to the austerity economies of the West is that Keynes has not been forgotten there. Writing in accessible language of thorny fiscal matters, the author ventures into oddly fascinating corners of recent economic history. For instance, a modern trope holds that actor Jayne Mansfield’s beheading in an automobile accident prompted changes in truck design (yet mass shootings have produced no comparable gun control legislation), but that turns out to be wrong: The actuarial minds of the late Nixon era put the value of a human (American, anyway) life at $200,000, did the math, and concluded that the proposed addition of safety bars “would need to save four times as many lives to justify the cost.” The larger point is that the government’s blind trust in the market is now the status quo, and “reliance on the market grants priority to people who have money.”

Anyone who wonders why government officials still take the Laffer curve seriously need go no further than this lucid book.