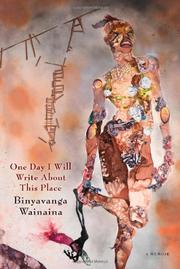 ONE DAY I WILL WRITE ABOUT THIS PLACE

A colorful, at times surreal debut memoir about coming of age in the hyper-diverse culture of late-20th-century Kenya.

Although he came from ethnically “mixed up” parents, Caine Prize–winning author Wainaina had an ordinary childhood. During the week, he went to school and on weekends played at his Uganda-born mother’s hair salon, “the only proper [one] in Nakuru…the fourth largest town Kenya.” His father, head of the national Pyrethrum Board, was a member of Kenya’s most populous—and politically powerful—ethnic group, the Gikuyu. When the country’s first president, Jomo Kenyatta (also a Gikuyu) died in 1978 and Daniel arap Moi, a Kalenjin, took over, life began to change. To the outside world, Moi’s Kenya appeared “an island of peace” in the sea of conflict-ridden East Africa. But the reality was far different. There was fierce competition between the many Kenyan tribes, and the country’s cacophony of language and sounds was little more than background noise to be endured rather the celebrated. By 1983, Moi, who had survived a coup attempt the year before, was showing tribal favoritism. Top-ranked high schools denied Wainaina, an excellent student, entrance at the same time that Kalenjins began replacing Gikuyus throughout the education system. As national politics turned increasingly bitter, “a fever of rapture-seeking” seized Kenya. With the country’s university system in disarray, Wainaina traveled to post-apartheid South Africa to study finance. Homesick, he withdrew both socially and emotionally and immersed himself in literature. He returned to Kenya but eventually went back to South Africa, ostensibly to finish his degree. Instead, he found himself actively ordering the chaos of culture, language and politics around him “on the written page.”

Language is clearly the author’s preferred mode of structuring the world, but it is also the plaything he uses with idiosyncratic grace and brilliant immediacy to capture “the scattered, shifting sensations” of memories and emotions long past.