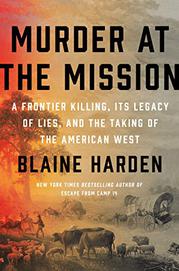 MURDER AT THE MISSION

A Frontier Killing, Its Legacy of Lies, and the Taking of the American West

Revisionist account of the once-well-known 1847 Whitman Massacre, an event that helped catalyze the American annexation of Oregon and Washington.

Harden focuses on the mission founded by Marcus Whitman and his wife, Narcissa, a place that became a locus for intrigue and murder. The two Presbyterian missionaries had come with pious intentions but a tendency not to listen to anyone, and they settled not among the more receptive Nez Perce but instead among the Cayuse people. “For eleven years,” writes the author, “albeit with mounting disappointment and bitterness, the Indians allowed the Whitmans to preach, teach, farm, and build on their land.” But on Nov. 29, 1847, a party of Cayuse massacred the Whitmans and 11 other White male settlers. The targets were deliberately chosen; other Whites were left alone. Harden diligently reconstructs the events over the years leading up to the killing, showing how Whitman opened Cayuse territory to White settlers streaming overland across the Oregon Trail without asking the Cayuse for permission to do so. The events were immortalized by another missionary, Henry Spalding, whom church authorities privately suspected of being a psychopath. Whitman had ridden back all the way to Boston to defend himself from church inquiries and secure further support for his growing mission, stopping in Washington on the way. Spalding, whose career was faltering, inflated the importance of Whitman’s trip, imagining that this sojourn in the nation’s capital was the “tale of a pious patriot riding east to save Oregon from the perfidious British.” Harden’s vivid reconstruction illustrates the process of Western mythmaking, beloved of Americans when it paints them in a heroic light; and of cultural collision, with the Whitmans almost willfully ignoring the Cayuse worldview. There’s a strong strand of anti-Catholicism, Know-Nothingism, and racism throughout, too, which lends Harden’s welcome study an unfortunate timeliness.

A boon for those who like their history unadorned by obfuscation and legend.