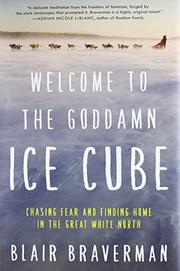 WELCOME TO THE GODDAMN ICE CUBE

Chasing Fear and Finding Home in the Great White North

A memoir of arctic adventure that goes deeper into self-discovery and finding a home.

“I’ve spent more than half my life pointed northward, trying to answer private questions about violence and belonging and cold,” writes Braverman, a dog sledder and journalist whose frequent, extended visits to Norway and Alaska began from personal circumstances but soon assumed the significance of a quest to find a place where she belonged. Her journey from innocence to experience followed the map from south to north: “While southern Norwegians took pride in their restraint…northerners were loose and vulgar. They cursed, slurred their words, joked often about sex and death, and gauged time loosely.” As a teenage foreign exchange student in Norway who later led dog sled teams for tourists in Alaska, Braverman was frequently tested by the male-dominated culture, wondering when jokes crossed the line into something more, whether she was experiencing harassment or it was just in her head. Though the narrative jumps back and forth, chronologically and geographically, the voice throughout remains as insightful and engaging as it is uncertain, from a young woman who is never quite certain if she is safe, not only from the climate, but from so-called civilization, and where danger might lie. “The thing was, nothing that had happened to me…was beyond the normal scope of what happened to women all the time. Some harassment by an authority figure, a few sexual remarks, pressure from an insistent boyfriend?” Yet her experience allowed her to recognize what had been wrong all along, as she found pleasure in sex where she didn’t feel that pressure and fell in love of her own volition. Her external experiences are extraordinary in the frigid north that so few have experienced, but it’s what happens internally that both sets this memoir apart and gives it universal resonance.