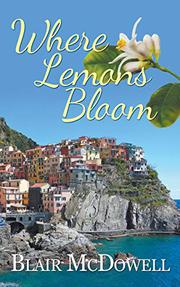 A young woman falls in love with an ex-con who’s desperately trying to clear his name in this charming romance-cum-mystery.

Eve’s on a much-deserved vacation following the death of her father, but her trip nearly turns deadly following an ill-advised dip in the ocean. A handsome, mysterious stranger comes to her rescue, and the two promptly fall into bed. What should have been a one-night stand slowly turns into something more when Eve and Adamo discover they’re both passengers on a cruise from Barbados to Europe. Soon, Eve has settled in with Adamo at his picturesque inn in Positano. (The vivid descriptions of the Amalfi Coast are likely to inspire more than one Italian getaway.) Yet her lover’s past—a stint in prison for embezzlement, a crime he didn’t commit—casts a shadow on their bliss. Eve, with the help of her IRS agent brother-in-law, a Mafia-connected businessman, and the sister of Adamo’s dead business partner (who committed suicide under strange circumstances), sets out to clear his name. McDowell’s (Romantic Road, 2015, etc.) sixth novel is a well-balanced mix of romance and mystery. The hot-and-heavy beginning initially suggests that Adamo and Eve’s attraction might be purely physical, but a sweet, believable romance springs from that initial encounter. Eve, initially “deeply afraid of life,” discovers the happiness she’s longed for, while Adamo learns to let go of past traumas. Watching this mature, sensible pair figure out each other’s quirks is truly enjoyable. Bringing her hero and heroine together early on also leaves McDowell free to concentrate on solving the story’s central mystery. Discovering who set Adamo up isn’t too difficult, though he is initially too good-hearted (or perhaps naïve) to realize the obvious. His passive, nice-guy persona is the book’s major fault, and at times, one wishes for a hero with a bit more verve. Still, the business of ensnaring those who conspired to send Adamo to prison has enough twists and turns to be entertaining even when it’s obvious where it’s all leading.