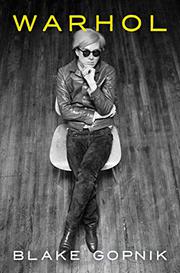 An epic cradle-to-grave biography of the king of pop art from Gopnik (co-author: Warhol Women, 2019), who served as chief art critic for the Washington Post and the art and design critic for Newsweek.

With a hoarder’s zeal, Andy Warhol (1928-1987) collected objects he liked until shopping bags filled entire rooms of his New York town house. Rising to equal that, Gopnik’s dictionary-sized biography has more than 7,000 endnotes in its e-book edition and drew on some 100,000 documents, including datebooks, tax returns, and letters to lovers and dealers. With the cooperation of the Andy Warhol Museum in Pittsburgh, the author serves up fresh details about almost every aspect of Warhol’s life in an immensely enjoyable book that blends snappy writing with careful exegeses of the artist’s influences and techniques. Warhol exploded into view in his mid-40s with his pop art paintings of Campbell’s Soup cans and silkscreens of Elvis and Marilyn. However, fame didn’t banish lifelong anxieties heightened by an assassination attempt that left him so fearful he bought bulletproof eyeglasses. After the pop successes, Gopnik writes, Warhol’s life was shaped by a consuming desire “to climb back onto that cutting edge,” which led him to make experimental films, launch Interview magazine, and promote the Velvet Underground. At the same time, Warhol yearned “for fine, old-fashioned love and coupledom,” a desire thwarted by his shyness and his awkward stance toward his sexuality—“almost but never quite out,” as Gopnik puts it. Although insightful in its interpretations of Warhol’s art, this biography is sure to make waves with its easily challenged claims that Warhol revealed himself early on “as a true rival of all the greats who had come before” and that he and Picasso may now occupy “the top peak of Parnassus, beside Michelangelo and Rembrandt and their fellow geniuses.” Any controversy will certainly befit a lodestar of 20th-century art who believed that “you weren’t doing much of anything as an artist if you weren’t questioning the most fundamental tenets of what art is and what artists can do.”

A fascinating, major work that will spark endless debates.