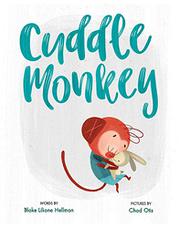 Lewis, an anthropomorphic monkey, can’t get a cuddle.

Little Lewis longs for a cuddle from his parents, but they’re busy with baby brother Owen. He improvises by trying to cuddle books, toys, and then others at school. “He even tried to cuddle a puddle (just because it rhymed).” Back at home, his mother urges him to teach Owen to cuddle, but the results are “wiggly and squiggly” rather than cozy. Otis’ art shows great energy and a strong design sensibility, but the characters themselves, all anthropomorphic monkeys, may give readers pause in the wake of librarian Edi Campbell’s public scholarship on the racist history of illustrated apes or Henry Louis Gates’ coverage of the same content in Stony the Road (2019). Author Hellman’s bio claims “cuddle monkey” as a self-identifier, and illustrator Otis dedicates the book to his “two cuddle monkeys,” demonstrating both innocent intentions and, perhaps, the lack of awareness that undergirds them. By the time Lewis finally gets a bedtime cuddle from his parents, storytelling rather than ideology may trip up readers: Why was a quick hug so hard to come by earlier in the day? Poor Lewis!

Not a sure pick to cuddle up with.