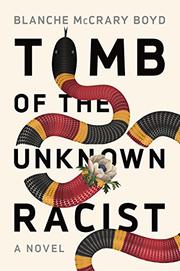 TOMB OF THE UNKNOWN RACIST

It’s been years since we last saw Boyd's old protagonist, Ellen Burns: Now it’s 1999, and Ellen—stable and sober—is living a quiet life in Charleston, caring for her aging mother, who’s struggling with dementia. That is, until Page 8 (the book wastes no time). And then one night, after Wheel of Fortune, Ellen is startled by a familiar face on the TV news. A young mother in New Mexico has been kidnapped; her children are missing. Ellen knows that face, though she hasn’t seen it in years: It’s Ruby, her brother’s daughter, now all grown up. Not that Ellen has seen her brother, either: According to the FBI, Royce Burns is dead. Once a celebrated novelist, Royce became a fervent white supremacist, abandoned his multiethnic family, joined up with an underground terrorist organization, and was killed as part of a face-off with the feds. Or at least, that’s what they’re telling her—though she buried his ashes in a child-sized coffin, Ellen herself has never been totally convinced of his death. And so Ellen, both totally plausible and larger-than-life, finds herself rushing to Ruby’s home in New Mexico, still loyal to the idea of her family despite her brother’s crimes. But as she digs into the case alongside rugged police chief Ed Blake, she discovers Ruby’s story—and Royce’s—is even darker and more disturbing than she’d suspected. A gentle romance with Ed bubbling hesitantly in the background, Ellen sets out on a quest to find out the truth about her brother— and is forced to grapple not only with the crimes of her family, but with her own culpability as a white woman, Royce’s sister or not. Unexpectedly light, even chatty, given the subject matter—white supremacy, unspeakable violence, American extremism—the novel is a family drama with all the flourishes of a thriller.