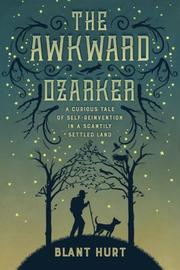 A Curious Tale of Self-Reinvention in a Scantily Settled Land

A newspaper columnist shares humorous stories of being a “city slicker” in the country.

Native Arkansan Hurt (Healer’s Twilight, 2000) is no stranger to the “hillbilly” tag that’s typically attached to Arkansas in general and the Ozarks in particular. That awareness gives his homespun memoir much of its charm. It has an easygoing, regional appeal that reflects the author’s background as a columnist whose credits range from the Jonesboro Sun in Arkansas to the Wall Street Journal. Hurt and his wife are flatlanders from the part of Arkansas that’s not the Ozarks, but they still ended up the owners of a rustic—to put it kindly—cabin on 27 acres of land on Hogback Mountain. As he notes, “Chance and serendipity play a larger role in our lives than we often care to admit, and this is what makes things so interesting and unpredictable.” He’s not kidding: consider a town meeting he describes, which includes “a quick demo on making a filter from a tin can and piece of wire, plus a refresher course in how to properly use a whistle” and the passing around of a book titled Mushrooming Without Fear. At the same time, the author is fiercely protective of his home: he can make fun of local follies, such as a medieval castle that a local started and never finished, but he’s not amused when the New York Times publishes “a snarky article” titled “Fixer-Upper. Ozarks Views. Vassals Welcome.” Hurt writes with a certain courtliness and a dry sense of humor; he freely admits that he and his wife are precisely the sort of “yuppie homesteaders” targeted by the Williams-Sonoma catalog, with its “ever-so-cute chicken coop made of red cedar.” Still, the book’s main thread is how connected the author feels to the Arkansas mountains. One criticism of the memoir is that some stories just dribble away without resolution, such as one about a young woman in an orange Camaro who barrels down a highway and into a ditch. Hurt checks on her; she’s OK and explains that she’s en route to file her marriage license—and that’s about it. But for the most part, the author makes good company.

Engaging fish-out-of-water memories—think Green Acres but much better—that should appeal to anyone with fantasies about trading bright city lights for the back country.