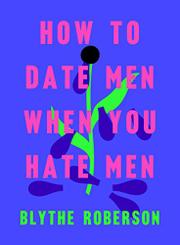 HOW TO DATE MEN WHEN YOU HATE MEN

A frank battle cry from a 20-something woman in the modern-dating trenches of New York City.

Roberson, a freelance humorist and researcher at the Late Show with Stephen Colbert, wields generous self-criticism to chronicle the current state of affairs among heteronormative singles on the hunt for love and/or just enough interaction with the opposite sex to keep the conversation about male idiocy going. Despite the catchy title, this book is neither a polemic against men nor a navigational how-to tome filled with advice. There is no narrative arc (chapters include, among others, “Crushes,” “Flirting,” and “Breaking Up”), catalyst for personal or romantic evolution, or tests of any real consequence for the author. Readers in search of deeply personal revelations should look elsewhere, but those seeking relatable accounts of just how unromantic the pursuits of romance actually are will be richly rewarded. Roberson’s great strengths are her blistering comedic sense and her cringeworthy, unexaggerated insights into her dealings with men. By “men,” clarifies the author, “I am talking in most cases about straight, cis, able-bodied white men…who have all the privilege in the world”—traits Roberson admits could be used to describe her. The author is as forthright about her sexual desires and lack of understanding of “ANY text ANY man” sends her as she is about her lack of experience with intimacy. Throughout the book, Roberson provides plenty of reasons for readers to laugh out loud. In a list of ways to kill time while waiting to answer a text, for example, she includes “Be in Peru and Have No Wi-Fi” and “Think About a Riddle.” She also satirizes The Rules, the notorious bestseller with archaic advice about how to catch a husband, and seamlessly weaves in pop-cultural references to countless sources. The so-called conclusion is a misstep; this book isn’t a story so it doesn’t have a beginning or end. Roberson doesn’t have a vendetta against men, only an understandable wish that they would be clear about their intentions and then take action.