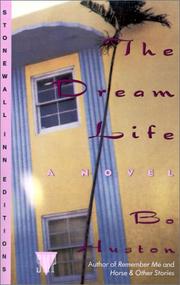 In this gay coming-of-age novel, a hustler tutoring an adolescent absconds with the youth on a journey into and across America. Too much literary pretension and imitation get in the way of some infectious quirkiness, and finally the book serf-destructs. Jed, at 13, has a voice that imitates Holden Caulfield's, and at crucial moments Huston (Horse and Other Stories, Remember Me--not reviewed) seems almost to cut-and-paste in snatches of Salinger's prose. Not a good sign, of course: ""Everyone is mean to me,"" the kid complains to his mother, who hires Hollis Flood, or Holly, to be the boy's tutor. The story is told alternately in Holly and Jed's voices--a device that, on the one hand, lets us compare Jed's innocent worldview to the cynical view of Holly, who's sick and apparently dying. On the other hand, too often Huston allows the two voices to give different versions of the same episode, slowing down the pace. Holly tutors Jed, then takes off with him, whereupon Jed's mother, of course, reports the ""kidnap,"" though Jed is Holly's willing companion. After stops in Kansas (where the two consummate their relationship) and Las Vegas, they arrive in LA.; Holly puts Jed to work as a male prostitute. Holly, an unsympathetic character despite his account of a gothic childhood, is finally deserted by Jed, who heads for San Francisco, but not before worrying about safe sex (something Holly seems not to have heard of) and becoming the ""little darling of a weird crowd."" This is thin broth, unfortunately. Only some lively gay gossip by Holly's California crowd relieves the tedium.