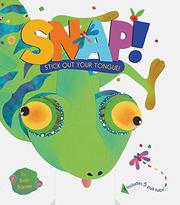 Stick Out Your Tongue!

Face it: Tongues are weirdly enthralling to toddlers and preschoolers, who are going to be even more intrigued after experiencing this lively board book. Inside, readers get up and close and personal with five different animal faces. Pull the tab from their mouths, and a tongue emerges, from an insect-covered anteater’s to an unexpectedly blue, leaf-coated giraffe tongue. Once the tongue’s out, let go—and snap!—it recedes with a satisfying noise, as though the animal is hungrily devouring its meal. Because the elastic that enables this special effect seems both well attached and robust, the snapping feature should attract and withstand plenty of action. The accompanying tongue facts are genuinely cool. Who knew that a blue whale’s tongue “weighs as much as an elephant” or that the chameleon’s “tongue is hollow”? Sitting against mostly white backgrounds, the page-dominating animal collages feel as energetic as their springing tongues. Brilliantly colored papers are cut, ripped, layered, and painted, making the critters feel three-dimensional. The few strategic background elements, such as a diminutive scuba diver alongside the blue whale or the paper wasp’s nest (incorrectly identified as a beehive) behind a sun bear present the animal’s scale. If the book has a downside, it’s that there’s not enough of it.

Snap this one up.