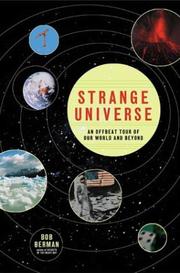 The Astronomy columnist (Cosmic Adventure, 1998, etc.) invites readers to prowl their neighborhoods in search of everyday phenomena, then sit back and let him explain them—as well as the rest of the Universe.

Berman’s choices, based on his collected columns, are far-flung and randomly sequenced. They run the gamut from those strange puddles in the road on hot days that disappear when you get to them (aha: refraction!) through the double rings around the Sun (if you’re ever lucky enough to see them) to the panic-inducing suggestion that the mitochondria parasitically inhabiting our brains could be an alien life form that arrived eons ago. Not realistic? Then consider, the author further suggests, that every one of the 240 muons that pass completely through your body every second has the potential to carom off a bit of genetic material and cause a spontaneous cancer. The disparate facts and ideas come fast and furious, generally revealed by Berman with a little hyperbole here, a flourish or two there, and even the occasional bona fide cocktail-party aphorism like “without entropy, time need not exist.” Exhausted, bored, or terrified readers would have little trouble putting this down and picking it up again a few days, or even years later. Phenomena junkies will of course be grateful for being teased into finding out why trees cast blue shadows on snow, but not all will stay in tow as the author duels in an edited transcript with an unnamed cosmologist on why black holes simply “can’t be created in our reality.” The author’s enthusiasm, naturally, becomes most evident in astronomical and cosmological areas, and his treatment of meteors, asteroids, and debris of various origin that bombard the earth day, while not particularly alarmist, may convert a few TV watchers into sky watchers. “It never stops,” Berman notes. “Several stray meteors will pass within a few dozen miles of you during the next sixty minutes.”

Diverting and often insightful, but ten minutes later you could be hungry for knowledge all over again.