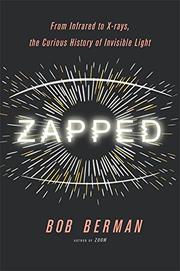 From Infrared to X-rays, the Curious History of Invisible Light

An enthusiastic account of all the light we cannot see from a science popularizer with a knack for presenting hard facts clearly and stylishly.

Berman (Zoom: How Everything Moves: From Atoms and Galaxies to Blizzards and Bees, 2014, etc.), a columnist for Astronomy magazine and science editor of the Old Farmer’s Almanac, promises that in his latest book of popular science, “myths will be busted and wild facts will abound.” He keeps that promise as he clarifies for the nonscientist the nature of the many forms of radiation around us. First, the author tackles visible light, introducing the difficult concept that light is both a particle and a set of waves of electricity and magnetism. From there, he moves on to light outside the visible spectrum: infrared, ultraviolet, radio waves, microwaves, X-rays, gamma rays, and other forms of radiation that surround us and bombard us. Due to information overload, some readers may be inclined to skim or skip ahead in certain sections. Aware that the material is occasionally dense, Berman cues readers with lines like, “read the preceding paragraph one more time,” and “I hope you’re taking notes on all this.” Thankfully, the author interweaves his science lessons with selective profiles of pioneers in the field and fascinating tales from fiction and real life—e.g., Archimedes’ supposed burning of enemy ships with focused sun rays, the death rays depicted by H.G. Wells in The War of the Worlds, and astronaut Edgar Mitchell’s brain wave–based ESP experiments during the Apollo 14 mission. Berman includes a chapter on solar eclipses, a favorite phenomenon of his, and there is a bit on the Big Bang and cosmic radiation. For those concerned about health and safety, the author deftly separates fact from myths about cell-phones, brain scans, and other sources of radiation. For those curious about what lies ahead, he takes a look at future applications of invisible light in medicine and computing.

A guide for laymen written with gusto and assurance.