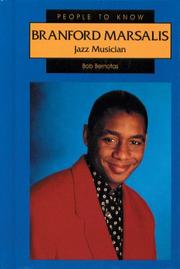 A dry but serviceable look at the career of the oldest Marsalis brother, currently enjoying an enviable gig as musical director of the Tonight show. Despite the obvious talents of Wynton and his other brothers, Branford's mother allows that he was the child with the most natural musical ability; after other career options failed to pan out, he turned pro in 1980, toured with Art Blakey and other greats, and helped to spark a revival of popular interest in jazz. He is a versatile musician, playing both clubs and arenas, composing for (even appearing in) films, touring with pop singer Sting, recording with his own band and others; his loose, cheery style is said to complement brother Wynton's more serious, controlled approach. Basing his narrative entirely on secondary sources, mostly magazine articles, Bernotas (Spike Lee: Film Maker, 1993) barely mentions Marsalis's private life, discusses his music only in general terms, and salts his narrative with plenty of sound-bite quotes. This last, plus a tendency (common in jazz writing) to mention nearly every player in every band, makes for occasionally laborious reading; still, this is the fullest account yet of a musician who is sure to become more popular and influential as time goes on. End notes; index; source list; chronology and discography (through early 1994); 12 full-page b&w photos (not seen). (Biography. 12-15)