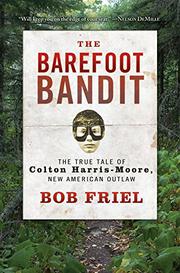 Travel journalist Friel became fascinated with Colton Harris-Moore when he and his wife relocated to the seemingly peaceful residential island of Orcas in the waters off Washington State. Harris-Moore, born in 1991, grew up on Orcas and knew its terrain intimately. By age 10 he was stealing from local businesses and homes. Caught occasionally, he served time in juvenile detention before starting a new crime spree focused on stealing and flying private airplanes, even though he had never completed pilot training. When Harris-Moore could not successfully steal an airplane, he stole pleasure boats and automobiles. As his brazen thefts spread to other islands and then to the mainland, law-enforcement agencies felt certain they could capture Harris-Moore. They were wrong. He often escaped on foot, outrunning police despite his insistence on going through life without wearing shoes (hence his moniker "the barefoot bandit"). Those bare feet and his height caused Harris-Moore to stand out, but he seemingly did not worry about disguising himself. The bulk of the narrative provides sometimes-overwhelming amounts of information about Harris-Moore's crimes and his escapes. Friel also examines his subject’s haphazard home life, his loving but often inept mother, his unpopularity in school and his apparent desire to go through his young life as a loner. The author eventually became involved in the search to locate Harris-Moore, adding a mostly effective first-person element to the saga.

A remarkable crime saga that could have been 100 pages shorter.