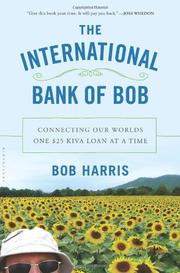 THE INTERNATIONAL BANK OF BOB

Connecting Our Worlds One $25 Kiva Loan at a Time

The story of a well-meaning American journalist who travels the poorest regions of the world in search of the human stories behind microfinance loans.

Having landed a plum assignment in 2008 for Forbes Traveler that entailed staying at the world’s most expensive hotels in Dubai and Singapore, among other places, Harris (Who Hates Whom, 2007, etc.) returned deeply moved by the plight of the migrant workers he witnessed offstage, who had toiled to build the pleasure palaces of the rich. Resolved to do something to help alleviate the world’s enormous disparity of wealth, the author was intrigued by microfinance, the lending of small amounts to the working poor in the developing world, first formulated by Nobel winners Muhammad Yunus and Grameen Bank. Unlike charity, microfinance institutions like Kiva.org actually motivate people to change their lives, leading to better education, investment in capital equipment and acquisition of real estate. After hearing a talk by soft-spoken Kiva president Premal Shah, Harris sunk his $20,000 Forbes pay into 5,000-plus Kiva loans in approximately $25 increments that went to small, family enterprises from Peru to Cambodia. He then followed up by actually visiting clients and finding out how the money was spent and whether it did any good in helping bring people out of entrenched poverty. Harris embarked on an extraordinary journey, braving dengue fever, among other hazards. He visited a husband-and-wife furniture-making team in war-torn Sarajevo whose business sends their kids to school; a Rwandan single mother who used her loans to set up a thriving convenience store in her town; and the proprietor of an early-education center on Chicago’s North Side.