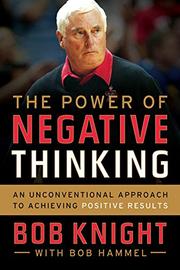 THE POWER OF NEGATIVE THINKING

by Bob Knight with Bob Hammel

Well into this book, it feels as though the word “negative” is a little too salty. Yes, there are plenty of negative-sounding commandments, but Knight comes across more as fiercely realistic and attentive. He obviously dislikes Norman Vincent Peale thinking (hence the book’s title) and the irresponsible optimism of finding good everywhere—precisely because it doesn’t involve thinking, but a failure to sensibly, actively engage. Knight writes with considerable bounce, and he relishes poking a sharp stick into the Pollyannaish clichés and platitudes of optimism: In response to that old chestnut, “Every dark cloud has a silver lining,” Knight writes, “The cloud is what you’d better notice.” But under the bluster and prickle is a common-sensical approach that is evidently effective if you are a basketball coach with a nose for winning. Despite the histrionics, the slap and choke, and chair throwing, Knight is the third-winningest coach in college-basketball history (he was just passed by Jim Boeheim). Knight counsels to question, worry, improve, do the research, exercise skepticism, avoid mistakes, talk less than you listen and be open to the new. The author is certainly not breaking any new ground here, but his advice is simple and energetic: Have the will to prepare to win; trust, but verify; if it looks too easy, you have a problem.

A quick, negative-to-achieve manifesto that initially sounds like a bummer but turns out to be brightly anecdotal.