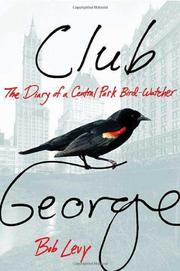 The Diary of a Central Park Birdwatcher
by Bob Levy
BUY NOW FROM
AMAZON
BARNES & NOBLE
GET WEEKLY BOOK RECOMMENDATIONS:

The education of a birding novice, enthralled through close contact with a red-winged blackbird in New York City’s renowned avian reserve.

No longer just an open secret among growing numbers of bird-watchers, Central Park is the host to hundreds of species of both migrating and nesting wild birds, as exemplified in the recent national media exploits of the once evicted (from his lofty nesting site on a posh Manhattan apartment building), then reinstated, by popular demand, red-tailed hawk known as Pale Male. The author finds himself unexpectedly at leisure—i.e., unemployed—in the Park where, through casual conversation with a birding enthusiast, he is introduced to a male red-wing (a member of the Icterid family of crows, blackbirds and kin) who, as Levy puts it, has taught people in the park to feed him by hand. George, as the bird is known by the regulars who observe and indulge him in his summer breeding on a small island in one of the Park’s ponds, serves as Levy’s initiation into birding—with all its techniques, jargon, fussy protocols and, ultimately, uplifting rewards. Levy’s pointers and reference quotes, as he widens his scope among other avian denizens of Central Park, are often useful to typical beginners. He is, however, a self-confessed and, after repeated interior debates shared with the reader, unapologetic anthropomorphist. Ornithologists and birding guides stress that projecting human behavioral causality onto birds—even giving them names—is not what understanding nature is about. And there are plenty of good reasons not to hand-feed wild birds, experts insist, most of them having to do with the birds’ security but also, although it seems not to have occurred to the author, the avian flu virus now lurking (Japanese crows are among the species found infected) may add significantly to the negatives.

Quirky and occasionally charming, but less than authoritative.