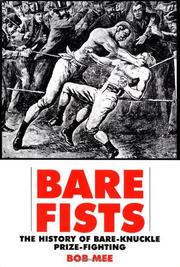 Although boxing historian Mee (Boxing, not reviewed) is evidently captivated by the brutal sport of bare-knuckled fighting, his 300-year history is too lackluster (and his laundry lists of contestants too benumbing) to make any converts with this effort.

Starting at the turn of the 18th century, the author charts the course of bare-fisted boxing from the earliest recorded brawls to the underground gloveless venues of today. He concentrates his research on English boxers (American bare-fisters are considered much later in the book), providing vest-pocket biographies of such boxers as James Figg, Tom Cribb, John Gully, William Perry, and Elizabeth Wilkinson (the “European Championess”), along with reformers like Gentleman John Jackson. Mee has a tendency to be wildly inclusive, especially in the early years, and he squeezes every last bit of recorded information into meaningless paragraphs composed almost entirely of names and dates. But what wafts off his pages is primarily the god-awful battering the contestants inflict on one another—all the vomiting of blood, the blue and lumpy foreheads, and the interminable battles (like the 140-minute fight between John Camel Heenan and Tom Sayers). The author’s prose, it must be said, does not elevate pugilism to art (although a report excerpted here from the magazine Bell’s Life on the Heenan vs. Sayers fight displays how exciting top-notch writing on the sweet science can be), and it comes with a great sigh of relief when Mee concludes that “pugilism is dead—and the signs are that we will not see its like again.”

Too often this reads like a telephone directory—but even as a reference it lacks an orderly design. (50 b&w illustrations)