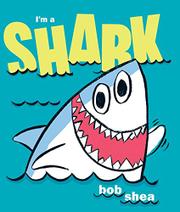 This shark is the bravest thing in the ocean, or so he’d like readers to believe. His underwater companions question his bravado by posing hypothetical scenarios. Shark unwisely reveals his arachnophobia through hilarious imaginary situations involving a squid, the dark and a growling bear. Witty banter begs for audience participation as Shark's puffery escalates. “I'm not afraid of the dark— / the dark is afraid of me! / Dark heard I was coming and ran!” Kids will respond when they see Shark working hard to cover up his fear (“If I saw a spider, I would swim away / as fast as my fins would take me. / That's not scared—that's smart”), and his friends reveal their own complicated anxiety. Thick, dark crayon strokes convey both Shark’s powerful physique and his endearing vulnerability. Both surprisingly understated and hilariously exaggerated, Shark’s relative size correlates with his shifting confidence. Bold, uncluttered mixed-media spreads emphasize this predator’s sharp-toothed, goofy grin. Intriguing design elements demonstrate the full extent of Shark's true worries. Though he claims to love scary movies, the reality shows him quivering behind a tub of popcorn while a young fisherman's smug expression dominates the silver screen. There will be no need to fear for Shark’s enduring popularity; here he proves he's one refreshing delight. (Picture book. 4-8)