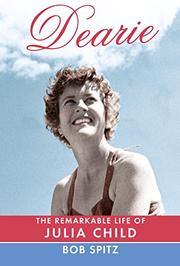 The Remarkable Life of Julia Child

Published to coincide with what would have been her 100th birthday, this biography of the iconic Julia Child (1912–2004) does full justice to its complex subject.

Spitz (The Saucier's Apprentice: One Long Strange Trip through the Great Cooking Schools of Europe, 2008, etc.) describes the “irrepressible reality” of Child, who became a TV superstar, effectively launching “public television into the spotlight, big-time.” In his view, the 1961 publication of her book, Mastering the Art of French Cooking, came at just the right time. Americans were tired of the preceding “era of dreary button-down conformity,” and they were ready for a gastronomic revolution. Frustrated housewives reading Betty Friedan's groundbreaking The Feminine Mystique welcomed the larger-than-life personality and showmanship of this tall, outspoken woman as she demonstrated the intricacies of French recipes with what appeared to be blithe disregard when things went wrong. Child reveled in her celebrity status, but this was only one aspect of her complex personality. Like most women of her generation born in traditional upper-middle-class homes, she was not expected to have an independent career. A wartime stint in the OSS was liberating. Not only did she hold a highly responsible job, but she met and married career diplomat Paul Child, moving with him to France. Popular accounts of her life, including the book and film Julie and Julia, describe her enchantment with French haute cuisine and her determination to master the skills of a top chef. Spitz captures another side of her complex personality: her fierce diligence in mastering the science as well as the art of cooking through detailed experimentation and her concern to translate the preparation of complex French recipes for readers in America—an attention to detail that carried over to her TV programs.

An engrossing biography of a woman worthy of iconic status.