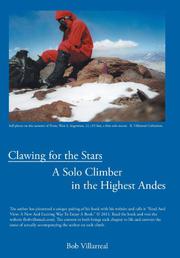 Clawing for the Stars

A Solo Climber in the Highest Andes

An aging former Catholic seminarian, ex-Marine and businessman, debut author Villareal recounts solo climbing the high Andes.
The author has navigated Andean superpeaks again and again to discover anew the extreme challenges of high-altitude climbing alone in the deserted mountain vastness of the Andes. Possessed of an indefatigable positivity, Villareal details many of his middle-age journeys in this book written for his young grandson, Alex, so that the young boy will come to understand his grandfather’s unique life and his decision to leave the pleasures of home behind and engage in the rigors of high-altitude mountaineering. He carefully plans and executes these risky mountain assaults knowing that one misstep may lead to his death. Villareal repeatedly reflects on his reasons for choosing this path not taken by most others. “Men go abroad to wonder at the heights of mountains,” Villareal writes, “Yet they pass their daily lives without wondering in the least about themselves.” He hungers to fulfill his individual destiny, but he has a hard time explaining the motives that push him to continue these terrifying ascents well into his 60s. His fascination for mountains remains an enigma, the author says repeatedly. “It reminds me of Moby Dick,” he says, “And I pray it doesn’t drag me under as the whale did Ahab.” Told in straightforward first-person prose, the book sometimes delivers exceptional descriptive passages that capture mountain moments, such as the alpine glow as it fades from the Andean summits: “A crooked shaft of flaming fire breaks the black of the distant horizon and illuminates the sky with glittering flame.” Some small grammar issues can detract from the relentless forward press to portray the privations and challenges of solo climbing at high altitudes. Linked to the author’s website, which features many of his pictures from his various journeys, the book stands on its own as a tribute to the author’s life of solitary adventure and individual courage.
An often riveting account that details the interior life of the solo mountaineer as well as his adventures scaling some of the highest and most treacherous peaks in the world.