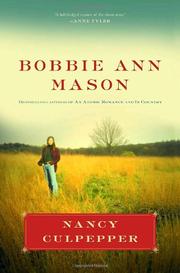 Four previously published stories, a novella and two new tales follow the author’s semi-autobiographical heroine in an uneasy back-and-forth between her native Kentucky and the wider world.

Like her creator, Nancy Culpepper is a farm girl who went to graduate school up north, married a non-Kentuckian and stayed away, without ever being able to much loosen the tenacious bonds that held her to her parents and her country roots. In modest, unassuming prose studded with simple, revelatory details, Mason (An Atomic Romance, 2005, etc.) traces Nancy’s odyssey over a quarter-century as her grandmother dies (“Blue Country”), her mother is treated for breast cancer (“Spence Lila”) and Nancy separates briefly from her husband (“Proper Gypsies”), sells the family farm (“The Heirs”) and learns she is going to be a grandmother (“The Prelude”). Son Robert is only a shadowy presence, and although Nancy’s fraught marriage to photographer Jack is subtly delineated, that too never has quite the emotional force as her relationship with her kin and her past. Mason writes with quiet authority about that most unfashionable of American subjects, class differences; we see that Nancy has always been the unusual one in her family, the one with her nose stuck in a book, “meant to use her mind.” But she never feels entirely at home among northern intellectuals, and we see that some of the problems in her marriage stem from Jack’s frustration with her overriding commitment to her birth family. Yet, as Nancy acknowledges in “The Heirs,” “she had gone away and not shared her life with them, except in her imagination.” This story and “The Prelude” remind us that such divided loyalties are the lot of every artist, no matter what her origins.

Mason has written some fine novels, in particular In Country (1985) and Feather Crowns (1993), but the short-story form has always seemed especially congenial to her; there’s hardly a wasted word or a sloppy sentence in this quiet, gently moving collection.