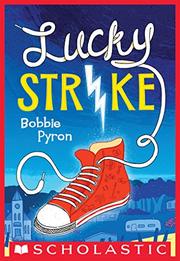 Could it ever be lucky to be struck by lightning?

In the case of 11-year-old Nate, the answer is a qualified yes. Thanks to his best friend's quick wits, he isn't killed by a bolt out of the blue, but the lightning miraculously changes his luck from the worst ever to the very best. Suddenly he goes from inept to incredibly skilled on the diamond, which moves him from nerdy outsider to a place among the popular. His luck rubs off on those around him, too. Unfortunately, swept up in his unaccustomed acclaim, he meanly turns his back on Genesis, his smart, analytical and touchingly vulnerable BFF. She's befriended, in turn, by Chum, the ultimate bully target. Nate remorsefully decides the only way he can return to being Gen's best friend is to reverse his lightning strike luck by getting struck again, a terrifying prospect he's nonetheless willing to face. Even lightly sketched characters leap off the pages, adding rich depth to an already satisfying tale. In the slightly fantastical Gulf Coast world that Pyron (The Dogs of Winter, 2012) has imagined, people can change in unexpected ways. With just a spark of magic, bullies can become true friends, those without humor can learn to giggle, and perennial victims can emerge victorious.

Amusing, endearing and sometimes even electrifying.